Gambling in video games has been a huge topic for devoted MMORPG players over the last year or so, as core MMOs like Guild Wars 2, Star Wars: The Old Republic, and Elder Scrolls Online have added or tweaked lockboxes, Path of Exile has raised the bar on lockbox transparency, Valve has been hassled by regulatory bodies for enabling underage gambling, and countries have considered classifying certain MMO practices as gambling for the purposes of regulation.

But it’s probably worth remembering that there is a very real and legitimized online gambling gaming industry out there competing for your dollars (in fact, some of them occasionally pop up in our remnant ads, depending on where you live, and we have to get out the mallet).

It’s all explained in a new report the analysts at SuperData prepared for the Dutch government as an overview of gambling practices in digital games, from the “social casinos” of Zynga and trading card games to e-sports bets and in-game item wagering.

Probably the most frustrating part is SuperData’s claim that almost two-third of Dutch and British social casino players exhibit “some form of potentially problematic gambling behavior,” and while social casinos do not actually involve betting real money, there’s plenty of real money being made in the genre, almost $3B in 2016, more than half of it from North America. And of course, those players are trained to move from social casinos to real-money betting (chiefly for the “excitement of risking money,” SuperData found).

There’s a bit of good news, though; SuperData argues that the legal dramas of 2016 “dramatically” shifted the course of virtual item wagering, such that “publishers are now avoiding all possibilities of gambing in-game.”

“Valve’s court appearance has set a precedent, and no other company wants to be next,” the company writes, using Overwatch (where Blizzard has made loot boxes untradeable) and EVE Online (where CCP has outlawed gambling entities) as examples.

Another key bit? While Hearthstone has been flagging of late, it took home a fifth of all digital CCG revenue last year. Not too shabby, Blizz.

The whole report is definitely worth a skim to see how e-sports is growing and how brick-and-mortar (heh) gambling corporations are entering what they see is a lucrative online space filled with suckers. I’d say we’re next, but we know it’s already upon us. 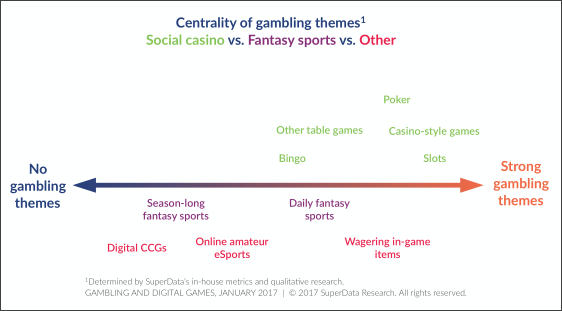