END_OF_DOCUMENT_TOKEN_TO_BE_REPLACED
Back in 2013, I took a walk through the annals of the EverQuest franchise’s history. What started as one title not only blossomed into a fill franchise including a number of games, books, and more, but also shaped a good share of our MMOverse to come. The creating studio (then Sony Online Entertainment, now Daybreak) couldn’t have known then how much EQ would still be influencing game design years later.

Much has changed in the life of the franchise since that first delve into the past, both in births and deaths. More expansions have been added, and more games have been lost. Here’s a look at the vastness that is Norrath now.

In the beginning, there was EverQuest . And the devs saw that it was good. And they nurtured it, and it grew. Oh, how it grew! And grew, and grew…

The game that launched the franchise launched itself on March 16th, 1999. Over the almost 20 years of EQ’s life (are you ready for a big 20th anniversary next spring?), the game has added 24 different expansions, sometimes multiple expansions coming in single year. When it started, EQ offered 16 races and 14 classes, but more joined the line up in over the years. Of course, many new features and a multitude of zones also became a permanent part of Norrath the first. The expansions are:

*Not included in the official expansion list are two major content updates tied specifically to the RoF expansion: Shadow of Fear (April 2013) and Heart of Fear (July 2013). For a more in-depth look at the details in all the expansions, you can check out our own Game Archaeologist‘s deep-dive into their histories.

More than just expansions, EQ experienced some other major changes throughout the years, notably the start (and end) of Mac play (2002), the switch to digital distribution (2003), and the change to a free-to-play model (2012). Over the years, some players lamented that the changes led EQ away from its hardcore beginning. That said, it retains a loyal and devoted playerbase to this day. Those who want the original experience have the Project 1999 emulator that started in October 2009 and gained Daybreak’s official blessing in 2015.

Coming to (and leaving) consoles

Even before Norrath was reborn as a sequel on the PC, it sprang up as a prequel on console. EverQuest Online Adventures, set 500 years before EQ, launched February 2003 on Sony’s PlayStation 2. In November, its only expansion EQOA: Frontiers was released, with more free updates following that. Unfortunately, EQOA shut down on March 29th, 2012., though fans have tried to resurrect it and even put out a call soliciting help in that endeavor in 2016.

More console fun came in 2004 with the co-op Champions of Norrath: Realms of EverQuest for the PS 2. It received its own expansion, Champions: Return to Arms, in February 2005.

Sibling rivalry in a sequel

When you say EverQuest, some players automatically think of the original game, but a good many will first think of the second. EverQuest II is the official sequel to EQ, set 500 years in the future. Launched November 2004, it started with a set number of classes and races — 24 and 15, respectively — and added more over the years. This version of Norrath had suffered several cataclysms so the land- and sky-scapes can be quite different, but there are familiar names and faces. Gameplay, however, is quite different, leading most players to prefer just one version of Norrath instead of playing both.

As the younger sibling, EQII has fewer expansions to date, but has kept up a good cadence of one expansion a year — with the exception of 2006 and 2011 when two were released. Before there were expansions, however, there were Adventure Packs. The Bloodline Chronicles (March) and The Splitpaw Saga (June) were both released in June 2005 before EQII’s first expansion. The third and fourth packs were nestled in between two expansions; The Fallen Dynasty released in June 2006, and Rum Cellar was released April 2016. EQII has enjoyed 14 expansions so far. 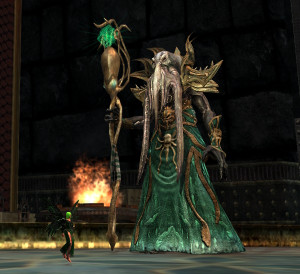 *Like its predecessor, EQII had special major content updates for free for those who owned DoV: Scars of the Awakened (April 2012) and Darkness Dawns (July 2013).

EQII actually converted to free-to-play before EQ; the payment model change happened when AoD launched in December 2011. Like its older sibling, EQII also has a loyal player base that has stuck by it over the years.

Fairly unknown to the majority to players (perhaps because its short life span), EQII branched into another iteration called EverQuest II East in late 2005. This version, which tried to take the game to China, Korea, and Taiwan, closed down in March 2006. The SOGA models created for it, however, live on in EQII as an alternate appearance model.

MMOs aren’t even the only entities within the franchise. Besides console adventures, the EverQuest franchise has other iterations out there. There was the PC spin-off strategy game project, Lords of EverQuest (2003). The Pocket PC had the RPG EverQuest Hero’s Call, which debuted in January 2003, that players could take on the go. Looky there, EQ went mobile really early on before it was hip! That mobile game even had a sequel that launched the next year — EverQuest Hero‘s Call 2. For a brief time there was an EverQuest Worlds app tied to the two main games, but that didn’t survive very long.

There was even a trading card game, Legends of Norrath, which started in September 2007. LoN could be played from inside EQ and EverQuest II or players could log in and play separately. The LoN loot cards were coveted by players as they offered goodies that were redeemed in either of the two games. Sadly, that game closed down as of August 2016.

If you prefer to just immerse yourself in the world and its lore instead of playing, you can pick up one of the books written about Norrath. From the original game you have: 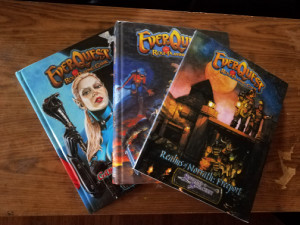 If you want to read about a future Norrath that never actually came to be, you can check out the EverQuest Next short stories and novellas (assuming you already got them or know someone who did, anyway; the wiki download links no longer work).

You could also immerse yourself in the adventure in another way with a tabletop roleplaying game system created in collaboration with White Wolf. I am now the proud owner of of the EverQuest Role-Playing Game GM guide, players handbook, and the Realms of Norrath: Freeport module.

Gone, but not forgotten

We’ve already mentioned a number of casualties in the franchise. The PS2 and Pocket PC games are lost to the ages alongside their respective devices. EQOA shuttered for good in 2012. While not a game in an of itself, EverQuest’s only Mac OS server, Al’Kabor, met its demise in November 2013. Legends of Norrath dissolved in August 2017.

And then there were the big booms.

Unveiled at SOE Live 2012, EverQuest Next was back on the fans’ radar. And boy, was it hyped! The tool for creating the game was also launched as a separate game. Introduced publicly at SOE Live 2013, EverQuest Next Landmark opened its alpha doors January 2014. It was quite the sandbox, ultimately allowing players to create whole adventures, dungeons, and PvP arenas on their claims. To enjoy a bit of a life of its own, the studio changed the name to simply Landmark. Then sad news came in March 2016 when fans were told Daybreak was stopping all development on EQN permanently. Landmark survived until its official launch in June 2016, but its days seemed numbered. Although some were truly hoping that EQN could live on through Landmark (while others were calling for its lynching, blaming the loss of the main title on it), the build-your-own-adventure game closed February 2017, not long after winning one last award from our own staff.

We’ll admit that with so many layoffs and all that, no one feels especially secure in the future of Norrath. How long the current games will continue and if there will be any new ones is definitely an unknown. We do know that Daybreak has had positions open over the years, and we’ve had rumors of a real EQ3, but the details are still unknown. Will the world finally see more EverQuest in some form? That’s a question to really explore another time; we can certainly hope, though we likely doubt.