It’s an alphabet soup of good (MMO) vibes this month! While many may have returned to the school of hard knocks this fall, plenty of MMO gamers have been participating in extracurricular activities of generosity, succor, warm fuzzies, and positivity. We’ve gone back to the school of life in September’s Massively Uplifting, with a slew of heartwarming September stories taking place all over our MMOverse, from weddings and memorials to mazes and mods.

Life includes loss, and Black Desert Online, Lord of the Rings Online, and World of Warcraft all had or have planned memorials for players who’ve passed away. While there are losses, there are also gains: Guild Wars 2 has an upcoming charity event, a Conan Exiles modder was awarded a grant, and a Fallout 76 player provided fellow fans with fall fun. Additionally, Wargaming hosted a massive festival, and a special MMO was recreated in honor of Charles Shultz and Peanuts’ 70th anniversary. AdventureQuest 3D pulled double duty with joy and sorry with both a wedding and memorial. And all that doesn’t even touch on the charity events!

Here’s a compilation of the heartwarming MMO stories of the month gone past, the stories highlighting times when life giveth and when life taketh away.

Life has given warm fuzzies in many different forms this past month. To start, a PS4 Fallout 76 player named Jcoffill has welcomed fall into the land of Appalachia by building a corn maze for fellow players to enjoy and celebrate the spirit of the season. Jcoffill noted that while there is a vendor inside the maze stocked with many season things for others to get, some players have been coming to the maze in costume and leaving gifts and treats for others to collect! Kudos to Jcoffil for creating a community activity as well as to those who join in with their generosity to make the experience delightful for their fellows.

Next, the warm feelings come in 2-D. Mobile developer Pixowl has just relaunched its Peanuts Snoopy’s Town Tale mobile builder sim completely redone in the animation style of Charles Schulz’s classic comic strip. It’s all in honor of the artist and his strip, which will be celebrating its 70th anniversary in 2020. Folks can stroll through this classic comic world and meeting its cast by picking up the game for free for Android in Google Play and and for iOS in the App Store.

On #ChildHealthDay, we're proud to be supporting @ExtraLife4Kids for the third year in a row to help kids like Benjamin, Izabella, Samerya, Eli, and Shane. Learn how you can be part of Team ArenaNet's Extra Life efforts at https://t.co/bh5ZAp9i3D #ForTheKids pic.twitter.com/ZLTpfM6WXL

While we often report the generosity of players and studios after a charity event, this time we get to offer you a heads up! Arenanet and Guild Wars 2 has planned a special event for Extra Life, set for the weekend of November 1st starting at 3:00 p.m. EDT. Over the past two years, ArenaNet and its community have donated over $80,000 USD to benefit Children’s Miracle Network! For this November’s event, if $25,000 USD can be raised over the weekend livestreams (where prizes and surprises are waiting!), ArenaNet will match the donation for a total of $50,000!

Here’s one for the creative folks: One Conan Exiles modder has been awarded an EpicMega Grant. JoshTech created the Pippi mod for the Funcom sandbox, which many players swear by. The grant is given to those who do amazing things with Unreal Engine or enhancing open-source capabilities for the 3-D graphics community to help fuel their success.

We are beyond happy to announce that JoshTech's mod, Pippi, has been accepted as a recipient of an EpicMega Grant! We are so proud of him and can't wait to see where the road leads him. Make sure to give him your congratulations as well as check the mod out if you're unfamiliar! pic.twitter.com/TxpEUzET3b

Sometimes, just coming together as a gaming community is an uplifting and soul strengthening experience. On September 15th, 250,000 people from 28 countries gathered in the Belarusian capital of Minsk for Wargaming Fest: Tanker Day. Wargaming worked with the Minsk City Executive Committee and the Ministry of Defense of Belarus to make a massive, open-air festival in Victory Park where fans and players of World of Tanks. As 2.6 million viewers from all over the globe watched online, revelers enjoyed 30 photo zones, 130 food court establishments, and interactive activity stands set up by the event’s partners. There were games to play (giant Tank Twister, arcade games), labyrinths to wander, breakdancing and DJing to learn in master classes, WoT competitions to win (with $25,000 and 500,000 in-game Gold plus computer accessories as the prize), selfies with tanks to take, and so much more. The night then ended with fireworks.

In other festival news, at RuneFest 2019 just this past weekend (we’re cheating a bit, since this technically happened in October, but we figure you won’t mind!) Jagex announced that the RuneScape had helped raise more than £175,636 (about $215,817 US) for charity so far in 2019. These funds were split among the studio’s three chosen charities, each focusing on mental health. Each of those charities — CPSL MIND, The Princes Trust, and Rise Above the Disorder (RAD) — received a check on stage in front of the entire live and livestream RuneFest audience. 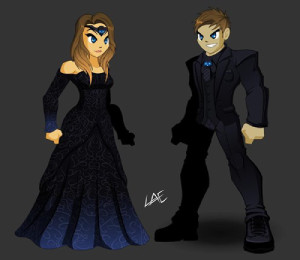 AdventureQuest and AQ3D recently had the non-frequent experience of celebrating the real-life wedding of two developers, Dage and Faith. In honor of these nuptials, a special in-game wedding event was also held for all the community to join in the jubilation, complete with wedding attire for any who wanted to nab some from the vendor in either game.

While the AQ and AQ3D communities had quite an up, they also suffered a massive down. When Artix Entertainment hadn’t heard from a community member Saiacosta — a young, talented rising star who was a guest artist for AE — Artix himself took to Twitter to see if anyone had head from him. Grievously, he learned a horrific attack took the life of this budding developer who contributed to AQ Worlds; he was slain alongside several of his family members. Saia’s latest work was just launched in game, though he didn’t get to see those fruits of his labors. The community was very shocked and saddened at the tragedy. “None of us can imagine what going through this is like,” a shell-shocked dev wrote. “So we took the best and only action that we could. On behalf of you and the team, we sent a monetary gift to the family taken from the proceeds of this year’s Talk Like a Pirate Day shop. The family never asked for this, but it is the least we could to help ease their incredible burden.”

The Black Desert community came together for another lantern-filled memorial for one of its own who passed away. Friends of Heart, or Sibyyl, gathered together the last week of September to pay their respects. And next week on October 13th, LOTRO’s community will hold a special in-game memorial for Hillrond on the Landroval server. Those wishing to attend should meet at the Prancing Pony stables at noon server time.

In a more personal memorial, one brother logged into his late brother’s WoW account to share the news that his brother lost his two-year battle with cancer and relay his brother’s final goodbyes to his guild. He took a screenshot of his brother’s Paladin, Edelweiss, before logging him out for the final time.

Here are a few other stories of community goodwill and camaraderie from September:

World of Warcraft: Classic is successfully letting some players reconnect with old friends

Thank you so much for featuring my corn maze <3 This made my day!

You are very welcome! Thank you for brighting other folks’ fall!

Thanks as always MJ for putting this together

You are welcome! It’s a highlight of my month =D

Mine too love this column :D