I have some bad news for fans of indie MMORPG TitanReach: The game has apparently suspended development thanks to a lack of funding. Australian studio Square Root Studios told players on Discord this morning that it had hoped to use the game’s progress in 2021 to induce outside investment, but apparently over the last month, that hasn’t paid off. Consequently, the team is hunting for paying work and returning TitanReach’s development “to a hobbyist state” in which the remaining developers won’t be full-time workers.

Players need to know that a game server for folks who want to keep playing the pre-alpha early access, and refunds – for those who bought the game or credits from August 9th onward – will be conducted. However, all the money gamers put in between December and August 8th is gone. 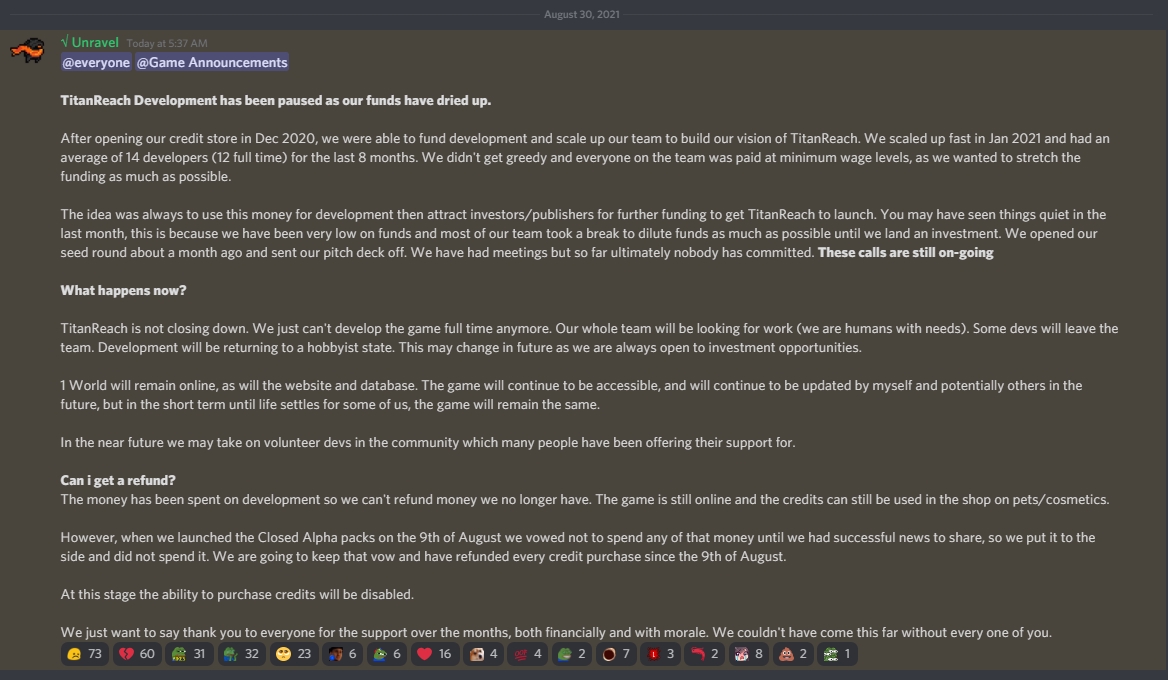 We’ve been covering TitanReach since 2020, when it launched a $430,000 US Kickstarter, which did not fund. Sydney-based Square Root Studios then announced plans for Indiegogo; when we used it as an example of how crowdfunding is misused for funding demos for investors, the studio objected to our characterization and insisted that its Indiegogo would use the less-problematic fixed-funding rather than flexible-funding.

But the Indiegogo never materialized, and within a few months, the developers were posting that the game needed funding or it would meet certain doom. “If we don’t get enough funds to cover our development through Jan and Feb until we acquire real funding, then it’s all over,” the team wrote at the time. Doom was apparently averted with the release of a credit storefront, which was exactly the type of flexible-funding people had been suspicious about in the months prior. Then the studio bungled with a statement it later stealth-retracted about its working conditions and worker pay, and its community lashed out at the media who covered it.

As of spring 2021, the game hit early access with a $70 price tag, which has come down in the interim as the studio released its ambitious roadmap and plans to launch in 2022 just two months ago. The early access pre-alpha also went free-to-play at the start of August, but that apparently just won’t be enough.