Around these parts, November highlights giving thanks (though no country has a monopoly on the practice!), and this past month not only gave us many things to be thankful for but also as shared expressions of thanks. Thanksgiving Day may be over, but giving and being thankful need never end. Give yourself a moment to share in this months uplifting moments in this month’s Massively Uplifting!

Giving itself was a strong theme throughout our gaming sphere, and we are truly grateful for all the generosity we’ve been witness to. Multiple studios ran or are running charity initiatives to benefit others: The studios and communities of ARK: Survival Evolved, Ashes of Creation, and Destiny 2 joined Extra Life to raise money for children’s hospitals, and Rainbow Six Siege and RUST supported drives for AbleGamers and Movember, respectively.

Sharing is caring, and we are able to share the experience of PlanetSide 2 players who took this motto to heart and showed their appreciate to the devs and their community through heartfelt messages. And on a sadder note, we share in mourning with the ARK and City of Heroes communities for their losses.

November held a number of different Extra Life charity events, with multiple studios and communities coming together to help raise funds to help various children’s hospitals. Studio WildCard brought in big support for Extra Life: During its 24-hour charity stream, the ARK community and sponsors help the4 Extra Life team raise over $180,000. In fact, this stream placed in the top four globally! During the event, WildCard also showed some sneak peeks up the upcoming ARK: Genesis Part II Expansion Pack, revealing David Tennant as one of the voices.

In its 24-hour drive, Ashes of Creations’ Intrepid Studios raised raise $88,546 to benefit Rady Children’s Hospital in San Diego, more than quadrupling the original $20K goal. This amount is added to the more than $50K that Intrepid Studios and its community has raised for Rady Children’s hospital over the previous three years, bringing the total raised to over $144K. Before this year’s event got underway, Rady Children’s Hospital also sent the community a special message of thanks, calling each supporter a miracle worker.

By reaching goals, the community also received rewards beyond the joy of helping kids in need; folks received a first look at The Ancients lore as well as other fun rewards, such as alpha key giveaways, a Disney Sing Along, and a chubby bunny challenge. A highlight was Creative Director Steven Sharif shaving his head and beard live on the broadcast. Of the event, Sharif said,

“2020 has been a rough year for everyone, and I’ve often found that it is when we are at our lowest, we find strength in helping others. And despite the divisions that exist in our world, there is more that unites us than divides us. It has been truly extraordinary to watch our Glorious Community shine a light of hope for children in need, through these events. It speaks to the bonds of friendship that have formed for many of us during the development of Ashes, and the common humanity we share.”

Also supporting The Children’s Miracle Network Hospital’s Extra Life and its own iPads for Kids initiative is the Bungie Foundation. Bungie’s Game2Give fundraising initiative on December 1st provided over 1.8 billion gamers around the world the opportunity to become “Light Keepers” to touch the lives of sick children world-wide. By signing up via game2give.com, folks can host fundraiser livestreams themselves or donate directly. The fundraising milestones included prizes from Destiny 2, gaming hardware, gift cards, and more. There was even the price of $20,000 to create the winner’s ultimate gaming rig from omaze.com/gamingrig.

Ubisoft launched the Sixth Guardian Program, which is a new series of charity bundles in Tom Clancy’s Rainbow Six Siege. By offering unique bundles, Ubisoft is giving players a way to support charity and receive in-game rewards. The full 100% of net proceeds (minimum of $6 USD per bundle sold), will be donated directly to the chosen organization. The first focus of this initiative the AbleGamers charity, a group that makes adaptive equipment and supports disabled gamers at no cost to the recipients. The charity bundle for Rainbow Six Siege will be available at the beginning at the launch of Year 5 Season 4. This bundle includes a uniform, weapon skin, charm, and headgear featuring the signature orange, white, and grey AbleGamers branding and is available on Windows PC, PlayStation 4, PlayStation 5, Xbox One, and Xbox Series X and Series S via the Rainbow Six Siege in-game store and the Ubisoft online store. 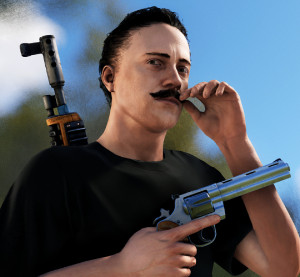 Of course, Extra Life is not even close to the only charity out there helping others, and there are even more communities and studios who reach out to support a variety of causes. Team Facepunch issued a Movember challenge, and the RUST community accepted; over 20,000 Movember Moustaches are currently floating around RUST. Those donations get added to Facepunch’s contribution, which brings the total to around $80K for the Movember cause, which raises money to make a difference in mental health and suicide prevention, prostate cancer, and testicular cancer. You can still donate or just check out the RUST team’s attempts to grow real moustaches for the cause.

ARK made more uplifting news this month by sharing a lovely memorial that one player built for his wife after she passed away suddenly. With the help of her sister, they created a special tribute on her favorite map, Valguero, that you can see in the header image. Touched by this story (and many other messages throughout the years of lost friends and family, WildCard went even further and set out to develop a lasting, permanent memorial to fallen players and loved ones. Level Designer Jackson Lawrence spent his own time designing this beautiful tribute to “all of the Survivors who have Ascended.” This beautiful tribute is placed on the Valguero map. Thank you WildcCard, for that – we, too, hope the gesture can bring “some comfort to players who have lost loved ones.”

Sharing grief and loss does not need to involve large memorials; just sharing and reminiscing together is poignant. City of Heroes also lost a member of its community recently. Known as @Justaris, Dr. Joel Robinson passed away suddenly, leaving behind family, friends, and comrades in the CoH community. Thanks to the touching obituary shared on Twitter by his sister, folks got to see a glimpse of the man behind the mask. And as one commenter expressed, “looks like he was as much a hero in RL as he was in game.”

We don’t have to donate money to be giving (especially if we don’t have any to give). Giving of yourself, your time, or even your words is just as valuable. Sometimes, the simple act of showing appreciation to others can be a huge deal; do not underestimate how priceless it is to praise and give thanks to others for what they do! A host of PlanetSide 2 players understand this and shared some celebration messages to both the developers and other players for the shooter’s eighth anniversary. Kudos to the community for these positive vibes and sharing this uplifting moment!

Have you seen generous and uplifting moments in the gaming world around you? Have you felt some warm fuzzies lately? Please feel free to share these or any of your own experiences with us! And may you all find joy throughout this season.

A Secret World Legends fan has created a huge (free!) graphic novel based on the lore

Ashes of Creation raised over $83k for Extra Life, so Intrepid’s Steven Sharif had to shave his beard

Pirates of the Burning Sea’s new operators released a new launcher, patcher, and website, with plans for a legacy server

Rivalry, or competition can certainly add things to online games that programming cannot. However I think most people, even most of those that enjoy rivalry or competition more so enjoy kindness, friendship and cooperation. To read about gamers and studios going above and beyond, for others in need, in their hobby or perhaps more, is really inspiring in this day and age.
Thank you MJ and MOP people for what you do, this site always adds some fun and happiness to my day.

It’s nice to see all those developers doing charity events. It’s pretty obvious that they did it to promote their games in hopes that this will bring them more future customers but as long as charities do receive all those money – it is a good thing for many unfortunate people who may need the treatments or anything else those money can buy for them. And it is much more than many other developers do, especially the ones who never do those kind of events ;-) Not to mention seeing Steven do these things on stream was kind of entertaining.