Welcome to a special edition of Make My MMO, Massively OP’s weekly and sometimes biweekly recap of the big news in crowdfunded MMOs. Hey, you folks who are convinced that Kickstarter is the absolute worst and that no crowdfunded MMOs ever launch? This column is for you!

However, this edition isn’t just our regular recap; instead, we’re going to look at the most important MMO crowdfunding news of the entire year. Let’s do a check-up, shall we?

We had two major MMORPG success stories on Kickstarter this year. The Sweden-based Book of Travels pulled in over $260,000 on the platform; it’s a roleplay-centric sandboxy sort of experience. On the complete opposite end of the spectrum was Zenith, to which gamers gave over $280,000, hoping to see their cyberpunk dreams come true. MMO strategy title Destiny’s Sword had a smaller haul of $24,000 on the platform, but it also released a demo this fall.

The trio of indie superhero MMORPGs continue development, though I think it’s fair to say Ship of Heroes and City of Titans put a bit of distance between themselves and Valiance Online this year, as both SOH and COT released beta versions of their character creator tools to the wild, and SOH is still pushing toward a true beta. We’d be remiss not to point out that City of Heroes’ resurrection prompted quite a bit of crowdfunding for the Homecoming server set too as players threw thousands of dollars at the game every month to fund it. 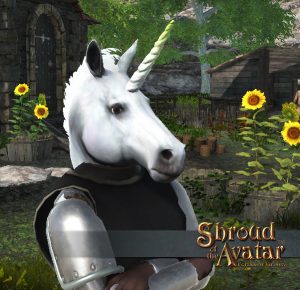 Shroud of the Avatar was a clownshow

Where do you even begin with SOTA? It’s been a year. In March, Portalarium closed its physical offices, insisting it was a temporary move. Over the course of the spring, we covered several SOTA snafus: missing Kickstarter rewards, missing SEC filings required by the game’s equity crowdfunding, and the weird obfuscation surrounding who exactly was CEO of the company and when that happened. By October, we learned that Richard Garriott’s company Portalarium had sold off SOTA and its assets to Catnip Games, a new company created by the game’s lead dev precisely for that purpose, and that the new company would be substituting in-game awards for the missing Kickstarter rewards.

We’d laugh all this off as more Kickstarter drama but for the fact that the new company set about impugning the press for covering these disasters, didn’t respond to press inquiries, and still have not delivered the legally required SEC filings – for formal investors, not just Kickstarter donors. It remains unclear what legal ramifications will attach to these companies going forward, but either way it’s disturbing for the dwindling playerbase.

Camelot Unchained, Crowfall, and Ashes of Creation muddled on

It hasn’t really been the best year for the big fantasy MMORPGs still slushing their way through development. Camelot Unchained, the oldest of the three here, is still in an NDA-locked beta and finally admitted it wasn’t going to launch in 2019; moreover, if it does make 2020, it won’t launch feature-complete. Crowfall had already delayed its soft launch twice, but on the upside it spent most of 2019 running pre-alpha campaigns that actually impressed us.

It’s always an odd time when the space MMOs look stable. Dual Universe has been trucking along through alpha this year, pushing hard towards a 2020 beta and 2021 launch, while Elite Dangerous is currently in the middle of testing a major bug-fixing update that – at players’ request – superseded the fleet carriers content originally planned for this December. A much bigger content drop, on which the “majority” of the live team is working, is still planned for 2020.

Star Citizen, too, made it from alpha 3.4.2 to 3.8 this year, with everything from female characters and persistence to space stations doing crimes. Oh, and court battles and rebrands and drama and $1700 ships. As one does.

Pantheon made great progress on its Project Faerthale slice in 2019, but tragedy struck this past fall when Visionary Realms’ Brad McQuaid passed away, shaking the community to its core. Visionary Realms, however, has vowed to continue on with the game and McQuaid’s legacy. “While we are deeply shaken and saddened, we are also unified in the design, direction, tenets and goals of Pantheon: Rise of the Fallen as development advances,” the studio wrote. “Visionary Realms is even more resolved to complete the vision he set out to create.”

Legends of Aria was once Kickstarted as Shards Online, and it’s still alive. After much delay, it finally hit early access on Steam this past summer, though it spent the fall reworking PvP again and then its business model; it’s currently a hybrid free-to-play MMO.

Money generated drama, as it does

Oh yes, you know there’s drama with some of these crowdfunded titles! We bought extra popcorn for the dust-up between Oath’s devs and its artist outsourcees, survival sandbox Day of Dragons pulled in half a million dollars and engaged in a YouTube war, and Chronicles of Elyria did not bring anything remotely resembling a storm but it sure did eke a lot more money out of its playerbase.

We also raised our eyebrows when Kickstarter itself canceled the campaign for RAW a day before it funded and prompted the dev team to call it “shitstarter.” The big news there was Kickstarter’s stated rationale: that RAW’s dev team would’ve needed additional funds beyond the Kickstarter to actually fund the game. Such a policy, if widely enforced, would certainly affect a whole lot of crowdfunded titles going forward – especially MMORPGs.

Other titles worth noting

Want a real eye-opener? Justin did a roundup of the top 10 biggest Kickstarters for MMOs ever. It’s already out of date, technically, as Book of Travels would’ve edged The Repopulation off the list, but it’s worth noting just how much these larger projects can pull in.

What would you argue was the biggest MMO crowdfunding story of the year?